What is The Difference between VMware vSphere, ESXi and vCenter

This post is not a deep dive, and it’s not even much technical. We’ll focus on VMware terminology. It’ is just a quick post for folks unsure about the differences between the base VMware products. Almost anyone knows ESXi, but the difference between vSphere and vCenter? People are often confused and unsure, but those answers are rather simple. Let’s get through this to clear any doubts. This post will teach you What is The Difference between VMware vSphere, ESXi and vCenter.

Launched in 2001, VMware ESX (formerly known as VMware ESX Server) has started the virtual revolution. Today, VMware is leading data center virtualization company (now part of Dell). Every year and a half there is usually a full release of new software which adds new features and also assures compatibility for new hardware, such as NVMe SSDs, very large Hard disk drives or latest Intel or AMD CPUs.

ESXi is the hypervisor. It is the piece of software (very tiny) which installs on a single physical server (host) and allows to run several different operating systems OS) to run side-by-side. Those OS are completely separated one from another but can communicate via a network with the rest of the world, with the rest of the computers running on Local Area Network (LAN). Operating systems are running on virtual machines (VMs) where each VM has a virtual hardware (CPU, Memory, Disk). 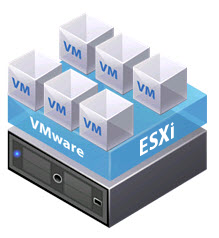 VMware ESXi has Free and paid version. The free version is somehow limited, allows limited scale and cannot be managed via a central management server – vCenter. However, the Free ESXi (also called VMware ESXi Hypervisor) can connect to remote storage where a VMs can be created, stored and executed. It means that this remote storage can be shared between several ESXi hosts, but not the VMs. The VMs are owned by each ESXi so no central management possible with this option.

The usage of ESXi Free is obvious. Learning, testing workflows, small DR tests, validating architectural decisions. By using snapshots, you can also validate windows patches. Example, you might want to create an isolated clone of your production server by using VMware Converter and P2V technology, and you want to test a big Microsoft service pack before rolling it directly into the production environment, and possibly causing a downtime.

VMware vCenter server is a central piece of software which allows central management of the whole infrastructure. From a single console, you can do pretty much everything. vCenter server can be installed on Windows, but also deployed as a virtual appliance (pre-configured VM) with a Photon OS (Linux) which is very fast booting Linux distribution. This swap to the Photon OS is quite recent, where VMware used Suse Linux Enterprise Server (SUSE). 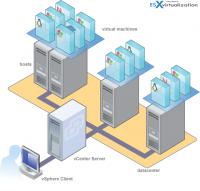 VMware vSphere is a commercial name for the whole VMware Suite. As I mentioned, the pricing differs, but one of the lower costs bundles are vSphere essentials or Essentials Plus. The difference between those two? There are. Everything is in the packaging and features, not the actual software.

Depending on the licensing you apply, the infrastructure “unlocks” more features accessible via vSphere Web client. Note that there is also vSphere HTML 5 client, but its functions are for now, limited. VMware continues its development.

Here is the View from the VMware vSphere console after connection to the vCenter server. 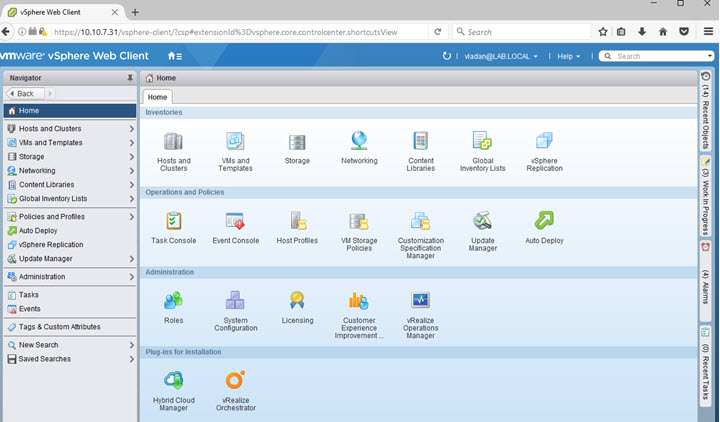 Differences between Essentials and Essentials PLUS below. As you can see Essentials does not have High Availability (automatic VM restart), vMotion, backup software (VDP) or possibility to add VSAN as shared storage option (separate licensing option – per physical CPU).

The Essentials is good for very small clients and clients which do not really need availability. Clients which can afford to stay “offline” for a day while doing hardware maintenance. On the other hand, having the possibility to migrate your VMs to another host and do a host maintenance or patching, without interruption, gives you a real advantage. This can be done during business hours and users can continue to work.

Also if there is an unplanned hardware failure, vSphere High Availability (HA) can restart automatically those VMw which failed when the host failed. Those VMs are automatically restarted on other hosts which are part of VMware cluster. There is small downtime during which the system figures out what host has failed and which are the hosts that are able to start the failed VMs. Those hosts must have enough available capacity in terms of memory or CPU.  Once this automatic decision is taken, the VM boots up. The whole process is completely automatic and acts without the admin’s intervention.

What is VMware NSX?

What is VMware NSX?

This site uses Akismet to reduce spam. Learn how your comment data is processed.